Instead, we teach pitchers the opposite. We tell them to shrink the strike zone. We teach them to make perfect pitches on the corners of the strike zone because we’re afraid of giving up a base hit. We teach them to throw uncompetitive fastballs six inches off the plate or 55’ breaking balls that the hitter never even thought about swinging at. Instead of being aggressive in the strike zone and utilizing all of it to our advantage (hitters tend to expand the zone with two strikes), we make it smaller and give ourselves little room for error. If we know the very best hitters in the world struggle when they’re down in the count, why wouldn’t we go right at them? Why do we let hitters back into counts instead of finishing them off while they’re down? Why do we pitch out of fear with two strikes instead of pitching with confidence and aggression?

I love Hall of Fame pitcher Greg Maddux’s thoughts about pitching with two strikes. See his thoughts below (image from @PitchingNinja). 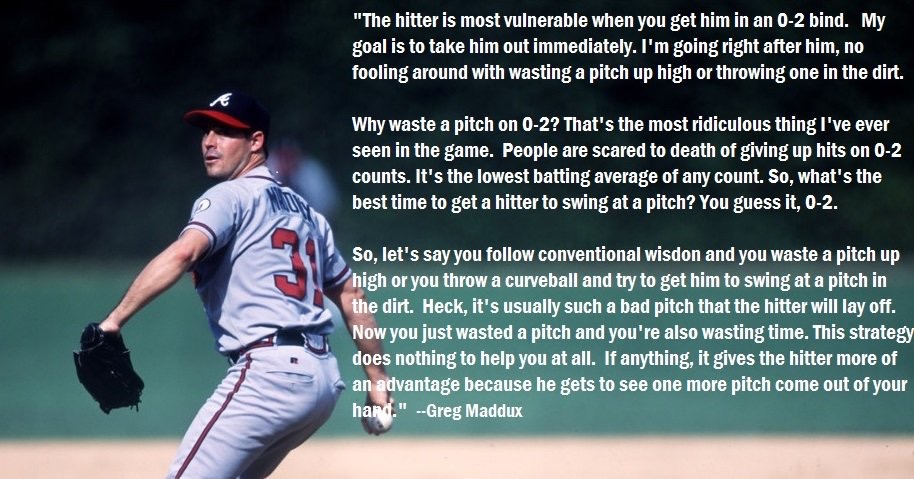 Feel free to check out Maddux’s stats to see how this worked out for him.

Below are some ideas on how to pitch with two strikes:

Feel free to reach out with any questions or concerns. Keep learning and growing – and get rid of your “waste pitches.”

Gerrit Cole is back

After a good – but not great – 2020 campaign, Gerrit Cole is on pace for the best season of his career in 2021. Through eight starts, Cole has thrown 52.2 IP, struck out 78, and walked just three batters for absurd K/BB of 26.0. He’s allowed just eight earned runs and currently owns a … END_OF_DOCUMENT_TOKEN_TO_BE_REPLACED

Why you need to train in-season

As snow starts to melt and trees start to bloom, baseball games are going to start filling the calendars of kids this spring all across the country. While this is an exciting time of the year, it can bring a multitude of challenges. With more and more training economy being dedicated to games, less is … END_OF_DOCUMENT_TOKEN_TO_BE_REPLACED

Four “magic tricks” you need to try with your players

We know that we’ve said there are no magic tricks when it comes to player development. Making meaningful movement changes is not easy. It’s really hard. If you want your training to show up when the lights turn on, you can’t cut corners. You have to put in the time, energy, and effort if you … END_OF_DOCUMENT_TOKEN_TO_BE_REPLACED

Coaches and GPS Systems: Navigating our players to success

What do you do when you need to drive somewhere and you’re not exactly sure how to get there? Simple: You pull out your GPS, punch in the address of your destination, and let it do the work for you. You’re going to get a couple of different routes, information on which one is quickest, and an estimated … END_OF_DOCUMENT_TOKEN_TO_BE_REPLACED

See part one for context on what biotensegity is and why it’s important here. If we want to train baseball athletes using the principles of biotensegrity, we need to understand how elite players move and produce force. Since baseball is a rotary sport, we have to start the conversation by defining good rotation. Below are … END_OF_DOCUMENT_TOKEN_TO_BE_REPLACED

The only mistake you can ever make as a coach

Coaches, let’s be honest. We’re far from perfect. We’ve made mistakes, told kids to do things they shouldn’t have, and put together programs in the past that make us cringe. While it’s tough to swallow at times, there’s absolutely nothing wrong about it. Those moments are a necessary part of the learning process to become … END_OF_DOCUMENT_TOKEN_TO_BE_REPLACED

Biotensegrity: What you need to know as a coach

At 108 Performance, our training is centered around two bedrock principles: All humans are pre-programmed for reciprocal movement All humans are living and breathing biotensegrity systems This article is going to focus on the second principle: What in the world is biotensegrity and why in the world is it important when it comes to training … END_OF_DOCUMENT_TOKEN_TO_BE_REPLACED

Below are 10 thoughts I’ve gathered watching a couple of Masterclasses recently. One was from Daniel Pink – best-selling author of Drive and To Sell is Human. The other was from Chris Voss – former FBI hostage negotiator. I’d highly recommend both to anyone interested in learning how to build better arguments. Sales is not … END_OF_DOCUMENT_TOKEN_TO_BE_REPLACED