Just like football, the pitcher and hitter are constantly competing for control of the strike zone. Pitchers are trying to pound the zone early and often so they can get hitters into counts where there are more strikes than balls. Hitters are trying to hit good pitches in good counts where there are more balls than strikes. Pitchers who get ahead are able to put pressure on the batter by making them expand the zone and swing at pitches that initially look like strikes. Hitters are trying to get into counts where pitchers are going to throw their most predictable (and straightest) stuff.

Based on this data, we can assume a few things:

Let’s dive a little further. Two counts I want to emphasize are the 0-0 count and the 1-1 count.

The first pitch is crucial to the direction the at-bat will take. Pitchers are going to throw their best pitches in their highest strike percentage locations in 0-0 counts. They want to get to two strikes as quickly as possible. They’re not going to nibble around the strike zone – they’re going to go right at you with their best stuff.

To avoid falling into two strike counts, most hitters are going to be very aggressive in 0-0 counts. They know the pitcher is going to throw the ball over the plate early in their at-bat. By hopping on pitches early in the count, they reduce the likelihood they’ll see an offspeed of breaking ball later in the count. In 2018, the MLB BA on cutters/sliders and curveballs was .267 and the BA on changeups was .279. On 4 seam and 2 seam fastballs, MLB hitters batted .348.

As a pitcher, this does not mean 0-0 counts are time to nibble. According to research done by Jerry Weinstein, 92.7% of first pitch strikes lead to an out or strike one. 69% of strikeouts begin with a first pitch strike, while 70% of walks start with first pitch balls. If you throw a first pitch strike, there is an 80% chance two of your first three pitches will be strikes. Considering what we know when the best hitters in the world get to two strikes, this is a huge advantage for pitchers.

Aside from 0-0 counts, 1-1 counts are arguably the most important count in baseball. To illustrate this, let’s look at some numbers for what happens after 1-1 counts. If the pitcher throws a strike and gets the count to 1-2, hitters struggled batting .159 with a .166 OBP. If the pitcher throws a ball and lets the hitter work back into a plus count, BA and OBP jumps to .349 and .351 respectively. In the matter of one pitch, we’re looking at a difference of .190 in BA and .185 in OBP.

As a pitcher, 1-2 counts are where we thrive. We can throw our best swing and miss pitches without worrying about whether we’ll walk the batter or not. Hitters can’t be as selective and must battle off a variety of pitches to work themselves back into a favorable count. In 2017 in 1-2 counts, Altuve batted .235, Judge batted .172, and Trout batted .188.

In 2-1 counts, the options for pitchers are limited in their arsenal based on what pitches they are most confident in throwing for strikes. We know that hitters get on base nearly 70% of the time when the count gets to three balls. We also know that in 2-2 counts, hitters batted .181 at the MLB level in 2017. As a hitter, we don’t have the pressure of fighting off a wicked curveball when the thought of going back to the dugout on strikes isn’t in our mind. Plus counts are where we do our damage. In 2-1 counts in 2017, Altuve batted .444, Judge batted .621, and Trout batted .486. If we’re doing the math from the averages above, that’s a .209 difference for Altuve, .449 for Judge, and .298 for Trout.

To summarize what we’ve talked about:

Coaches: Put a premium on controlling the strike zone in your practices. If you don’t emphasize the importance of hitting in plus counts or getting to two strikes quickly, don’t be surprised when your team can’t do either in games. Below are some ideas on how to do so:

Information used in this article from the 2017 MLB season can be found below.

Feel free to reach out with any questions or concerns. Keep learning and growing. 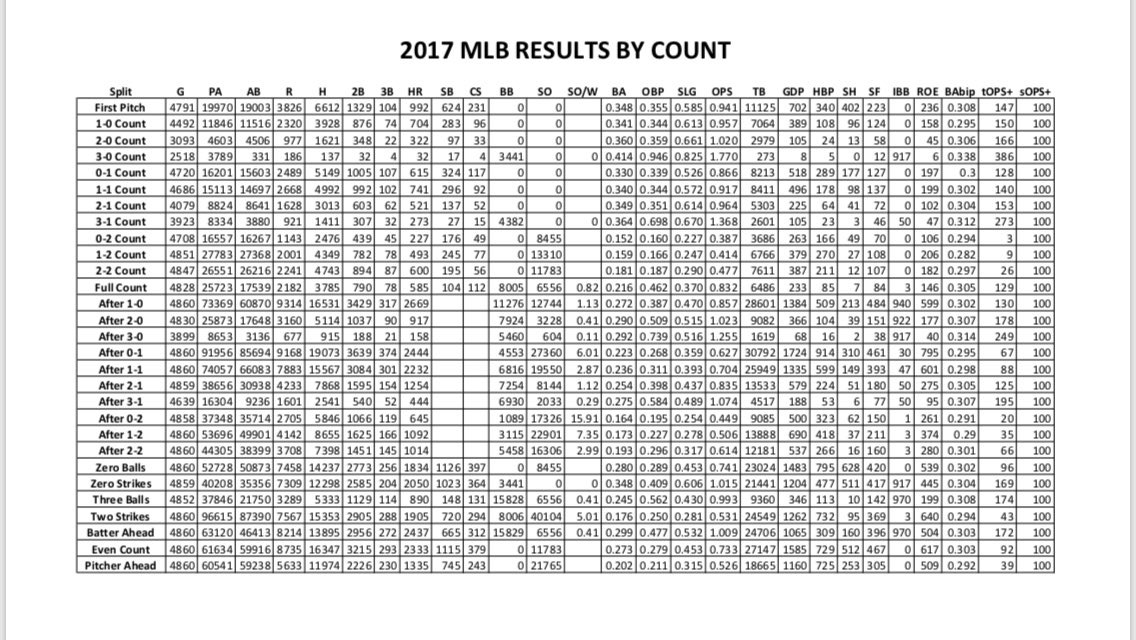 At 108 Performance, we have one specific kid in our program that stands out among the rest. This kid isn’t a big leaguer, college player, to even a starter on his high school varsity team. He’s only six years old. His name is Kellen.  Now Kellen doesn’t really stand out physically. He’s about what you … END_OF_DOCUMENT_TOKEN_TO_BE_REPLACED

Below is a sample scouting plan I put together for hitters to attack Dodgers ace Julio Urias this past postseason. Inside includes notable statistics, patterns, and actionable strategies I thought would be beneficial for opposing teams. All stats and video from Baseball Savant.   Notable Statistics Pitch Distribution 47.8% FB 34.2% CB 17.3% CH Started … END_OF_DOCUMENT_TOKEN_TO_BE_REPLACED

The other day I tried out a new skill. I went to the gun range.  As with any new skill, there was a learning curve to get up to speed. I received as crash course on the fundamentals of how to shoot. Top hand positioning, grip, how to wrap the left hand, footwork, how to … END_OF_DOCUMENT_TOKEN_TO_BE_REPLACED

As the ALCS and NLCS conclude and set the stage for the 2021 Fall Classic, below are some memorable moments from this postseason and what they can teach us about how to win games in October.      Two Strike Hitting In game three of the NLCS, Los Angeles trailed Atlanta 5-2 heading into the … END_OF_DOCUMENT_TOKEN_TO_BE_REPLACED

Before you call me crazy, try this trick out. Let’s create a situation where you’re working with a pitcher. On this day, they’re struggling to find their optimal arm slot. This is a pretty common issue we see when kids first come into the shop. There are a lot of different ways we could find … END_OF_DOCUMENT_TOKEN_TO_BE_REPLACED

On July 2, 1994 a lightning strike sparked a fire near the base of Storm King Mountain, about seven miles west of Glenwood Springs, CO. After 48 hours, the fire had only spread a mere three acres. While it didn’t start as an immediate threat to people, the persistent blaze caused local community members to … END_OF_DOCUMENT_TOKEN_TO_BE_REPLACED

In 1994, the New York Police Department (NYPD) implemented a data collection system called “StatCom.” The software was designed to increase and improve data collection on crime throughout the city so resources could be better allocated to areas of need. Objectives were built out, designed, and communicated in order to measure effectiveness. It started out with … END_OF_DOCUMENT_TOKEN_TO_BE_REPLACED

In episode ten of season five of The Office, Oscar Hernandez walks into his boss Michael Scott’s office. In his hands are a series of papers stapled together. The papers break down final costs over the past year for the Scranton branch. As Michael goes through the papers, Oscar explains how the branch did very … END_OF_DOCUMENT_TOKEN_TO_BE_REPLACED