An important concept you need to teach your players is understanding how to manage the controllables.  In baseball and in life, there are always going to be things we can and cannot control. The key is to understand where we choose to invest our energy and where we choose to let go. We’ll never be able tor each our competitive ceiling if we’re invested into things we can’t influence. We also won’t help kids do this if we worry about the things that they cannot control.

Stressing over things you can’t influence can lead to a snowball effect which degrades performance and can ruin enthusiasm for training.  On the flip side, investing your time and energy into things you can control helps you take ownership of your career by understanding what you can influence. A healthy combination of the two helps lead to a strong mental game, but a lack in either category can send a player spiraling for confidence. How do we prevent this? Well, it starts with understanding the difference between what we can and cannot control.

To start, I think it’s crucial people know what they can control before they understand what they can’t. Jon Gordon does a great job breaking this down (see image below) by saying at all times, we control our attitude, effort, behavior, and actions. This includes how we think, respond to adversity, treat other people, let go of the past, and focus on the present. By process of elimination, anything that doesn’t lie within these four controllables is ultimately something we can’t control!  This includes our environment, adversity, the past, and the thoughts, feelings, and actions of other people. 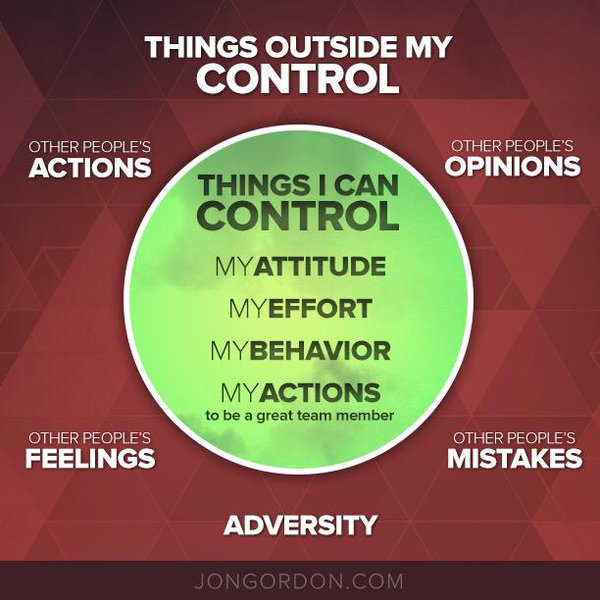 Let’s think of this in terms of a baseball or softball setting.  On the diamond, there are plenty of things we cannot control which include weather, field conditions, how you feel that day, your opponent, and the umpires – to name a few. With this, how often do we find ourselves complaining about how hot or cold it is outside? What about a bad strike three call we got rung up on? Or how about the fact that the mound isn’t made exactly to your liking and you can’t get a great grip? The bottom line is this: If we know that we can’t control these things, why do we spend so much time and energy worrying about them?

As humans, we have a limited amount of time and energy that we can spend throughout the day. If we are constantly worrying about things we can’t influence and playing victim to our situation, we’ll lose sight of the things that we can actually control. Is it the tournament’s fault that they scheduled you for an 8 a.m. game and you’re exhausted, or is it your fault that you were up playing video games until 2 a.m.? Was wearing short sleeves a good idea when the forecast for game time read a staggering 38 degrees? Was it the umpire’s fault you struck out on a borderline pitch, or was it your fault for watching the first two right down the middle?

It may be brutally cold outside, but it’s not any warmer for your opponent! The mound might not be in great shape, but they’re not rolling out a brand new one for the other team’s pitcher! The same problems you’re dealing with are probably the same problems everyone else is dealing with. The difference? Your opponent is figuring things out by focusing on their controllables. You, on the other hand, are getting worked up over things you can’t control and turning into a victim of your circumstances.

This is part of the reason why it is so huge to have a strong mental game: You have control over it at all times! Only you can control how you breathe, respond to adversity, and get 100% committed to winning the next pitch. Your process and commitment to executing it are always within your control. Sometimes we might not get the result we want, but we always have the ability to regroup and get ourselves ready to win the next pitch. If we’re constantly worrying about the field conditions, weather, or any other distractions we don’t have control over, we’ll never be able to do this.

Coaches: Keep it simple, get kids to control their attitude, effort, behavior, and actions to become great teammates! If Jonny strikes out, lift his chin up and get him ready for his next at-bat. He can’t control what’s already happened, but he can control his attitude, effort, and how he approaches his next at-bat. If Sam dogs out a ground ball to the shortstop because he’s upset he just missed it, pull him aside and let him know he’s letting his teammates down by letting a poor result dictate how he feels and acts. If Joey can’t throw strikes because the umpire’s zone is too tight, don’t feed his negativity by arguing with the umpire as well. Instead, get him focused on a consistent, attainable goal where he’s going to make adjustments, compensate, and compete so he can give his team a chance to win the game.

On the contrary, commend kids who show up, get after it, and own their controllables! Make sure Jonny knows you love the attitude he brings to practice! Give Sam a pat on the back when he shows great effort and sprints as hard as he can through first base every time he puts the ball in play. If Joey picks up his teammate after he strikes out, recognize it and let him know what a great teammate he’s being! For every action we find that we may not like, find something worth celebrating. You want to create enthusiasm for playing the game with great energy, attitude, and effort – not scolding kids every chance you get because they aren’t “mentally tough.”

The next time one of your players gets upset at practice or a game, make him ask himself: “Is this something that I can control?” If it is, make an adjustment and get them back on their feet so they can compete and be a great teammate. If it’s not, tell them to leave it where they found it. This game is going to beat you up enough on its own – don’t add to it by worrying about things you can’t control.

What a common driving mistake can teach us about skill acquisition

Think about the first time you ever drove to work. It was probably in a new area you were unfamiliar with. As a result, you decided to use a GPS to navigate the first few weeks. You needed time to get comfortable with the streets, where to turn, and how long it took to get … END_OF_DOCUMENT_TOKEN_TO_BE_REPLACED

Back in 2006, Houston Rockets owner Leslie Alexander hired Daryl Morey to be Houston’s new general manager (GM). Morey was 33 at the time. He had no playing background. He had earned an MBA from Harvard, as well as an undergraduate degree in computer science from Northwestern University. His only NBA front office experience was … END_OF_DOCUMENT_TOKEN_TO_BE_REPLACED

Bat to Ball Principles: The Importance of Spacing

If you’re currently having issues at the plate with getting jammed, squaring up baseballs, catching up to velo, or keeping your best hits fair, there’s a chance you might be fighting for space. “Hitters are always fighting for two things: time and space.” – Darin Everson, hitting coordinator Colorado Rockies Space is one of the three … END_OF_DOCUMENT_TOKEN_TO_BE_REPLACED

I just read a tremendous chapter from Dan Heath’s best-selling book Upstream: The Quest to Solve Problems before they Happen. In chapter 9, Dan detailed three examples of “ghost victories” that give us a false sense of success. The third one was the most powerful, in my opinion. He said: “There is also a third … END_OF_DOCUMENT_TOKEN_TO_BE_REPLACED

Could Andrew Heaney be the key to New York’s postseason hopes?

This past trade deadline, the New York Yankees made a much anticipated – yet surprising – splash in the market acquiring Chicago Cubs 1B Anthony Rizzo and Texas Rangers OF Joey Gallo. The two bats hope to bolster an injury-riddled (shocker) lineup that currently sits 6.5 games behind the first place Boston Red Sox and … END_OF_DOCUMENT_TOKEN_TO_BE_REPLACED

Back in 2018, Trevor Bauer stirred some tempers after calling out the Houston Astros for doctoring baseballs with illegal substances during their 2017 World Series run. Those remarks ended up circling back to Bauer when the former Red saw a significant increase in spin on multiple pitches at the end of 2019. On Opening Day, … END_OF_DOCUMENT_TOKEN_TO_BE_REPLACED

Gerrit Cole is back

After a good – but not great – 2020 campaign, Gerrit Cole is on pace for the best season of his career in 2021. Through eight starts, Cole has thrown 52.2 IP, struck out 78, and walked just three batters for absurd K/BB of 26.0. He’s allowed just eight earned runs and currently owns a … END_OF_DOCUMENT_TOKEN_TO_BE_REPLACED

Why you need to train in-season

As snow starts to melt and trees start to bloom, baseball games are going to start filling the calendars of kids this spring all across the country. While this is an exciting time of the year, it can bring a multitude of challenges. With more and more training economy being dedicated to games, less is … END_OF_DOCUMENT_TOKEN_TO_BE_REPLACED