A common mistake we see with a lot of our hitters is how they attempt to load after their move out of balance. This move is crucial to the rotary sequence and the movements that occur later up the chain. An inefficient linear move is going to put athletes in a poor position to really optimize their sequence. Since rotation swings the bat, we want to make sure athletes are in good positions in foot plant that enable them to do so with great power and efficiency.

To describe the move, we’ll use the terms negative and positive move. A negative move is when the hitter is going to create a substantial amount of “sway” in the direction of the catcher (golf has done similar work with this). You can identify this sway by looking at the hitter’s head in his set up position and when he gets to the peak of his move out of balance. If you draw a line on the hitter’s head in his set up, you can identify negative sway if there is a lot of space between the line and his head when he takes his move out of balance.

This move is going to give kids the tendency to get stuck on their backside, lose angles with their upper half, pull off balls, and get beat when facing velocity. Kids with a lot of negative sway tend to have narrower bases, lose power, struggle to stay through the ball, and have difficulties timing pitches in games. It’s a move that’s easier to get away with while utilizing tee work or flips because of the lack of a time constraint. It also gives kids the illusion they’re loading because a load in the traditional sense is thought of as a move back.

Instead, we like to teach the “load” as a positive move (think of the move a pitcher makes down the mound). Instead of swaying back to create power, we encourage kids to gain ground and work into the ground to generate a more forceful linear move. When the front foot comes up, the rear hip should begin to move forward – just like a pitcher. The head of the batter should move down and out – as opposed to up (working out of the ground) and back (negative sway). Below are a few examples for what this move should look like: 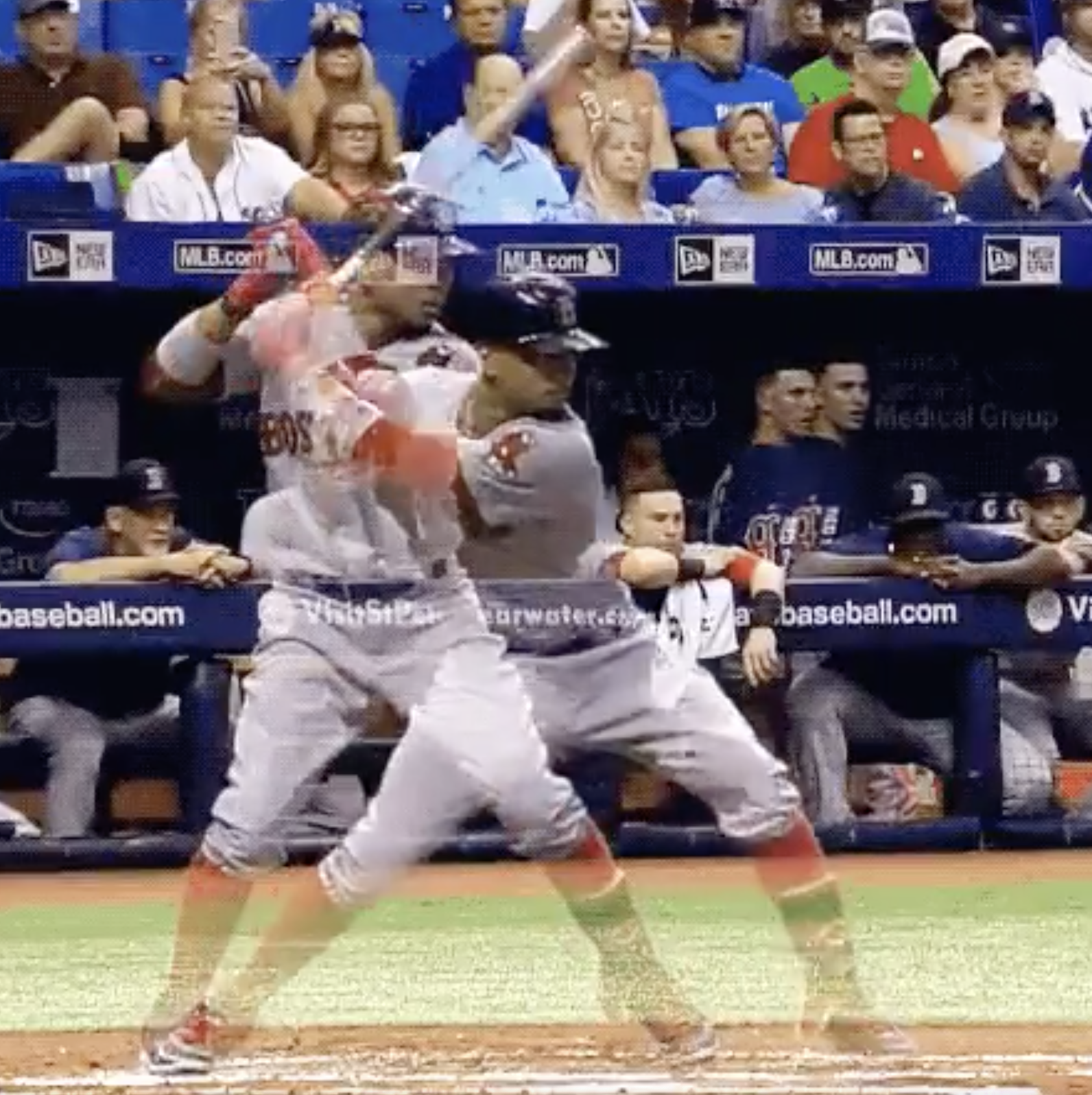 (Visual from hyperlink below) 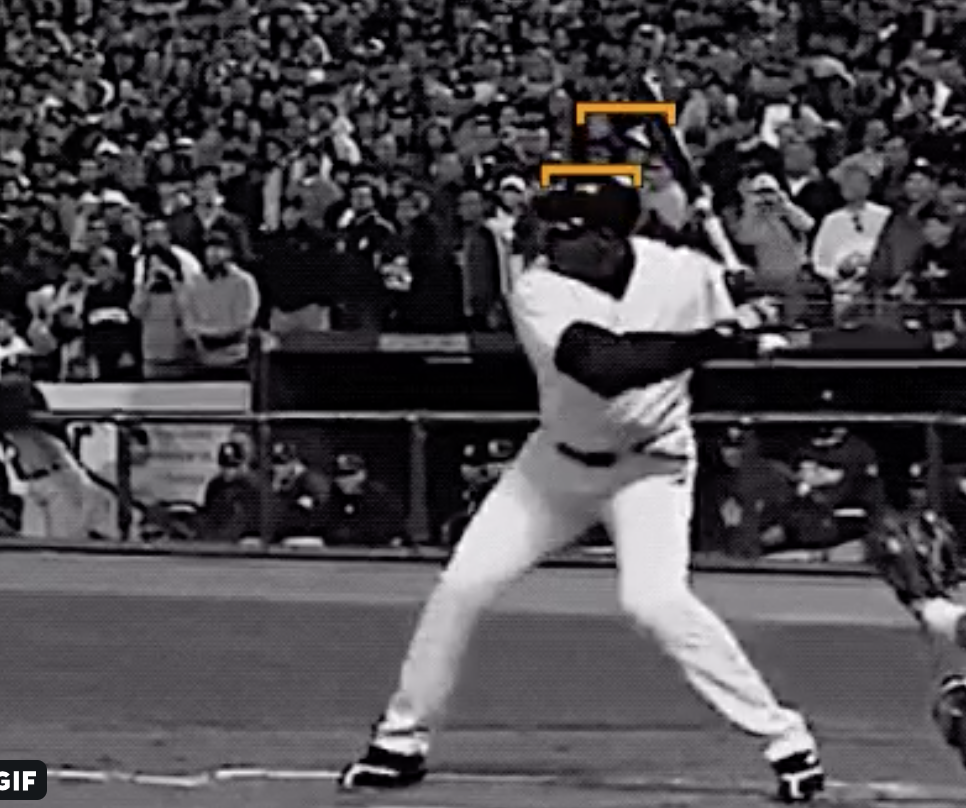 (Visual from hyperlink below)

Notice how the athletes immediately begin to move forward as their foot comes out of balance (some quicker, some slower). Their heads work down into the ground and out towards the pitcher. Once their front foot lands, their head stabilizes and does not continue to move forward. Their head stays over the center of their body helping them maintain a dynamic balance. They hold an attacking posture with their shoulders (front shoulder down, back shoulder up). As their foot moves forward, their hands move back to create their ideal stretch/hip shoulder separation.

It’s important to know that this is not a rushed move – we are not advocating kids to quickly pick up and put their foot down. We encourage kids to ride into their front side, maintain a vertical shin on the rear leg (we’re not pushing out of it), and keep tension in the rear hip/glute region while moving forward. We want to create a move that is driven by the posterior chain.

We also want to make sure kids are utilizing the lead leg for its main function – a timing mechanism. If we take a quick, uncontrolled move to the ball with our lead leg, we lose adjustability to various speeds/locations throughout the zone. A common cue we like to give kids is “earlier and slower.” Each kid is going to have his own style, but make sure they’re not rushing to put their foot down.

If you have a player that is struggling with a lot of negative sway, you can attack the issue from a few different angles. I like starting the movement progression with a medicine ball to eliminate the worry about squaring up the ball. From here, you can get athletes in a more narrow set up to eliminate the need to move back. The wider athletes get, the more of a need they feel to move back to load.

A popular drill we like to use is the “Belly Drill” – in reference to Cody Bellinger’s positive move to the ball (see link above). With a narrow stance (feet under shoulders, have the athletes take one positive move to the ball without any sway back. As for cues we like to use, getting the athlete to think “down and out.” When an athlete can get a feel for this movement with the medicine ball, we like to progress to a bat and can utilize it in our tee work, front toss, and even BP/machine variations. It all depends on the hitter, what you see, and how it’s transferring to more game-like conditions.

Below is an example of one of our athletes Cole utilizing the Belly drill. By simplifying his move to the ball, Cole was able to get much more out of his lower half (see the before/after still shots of him at footstrike). He’s since adopted a narrower stance to help him feel this move – something you can try with your athletes.

Below was Cole’s original swing

Below are still shots of him at his move out of balance and at foot strike. You’ll notice how the Belly move helped clean up a lot of negative sway and put him in a better position at foot strike. 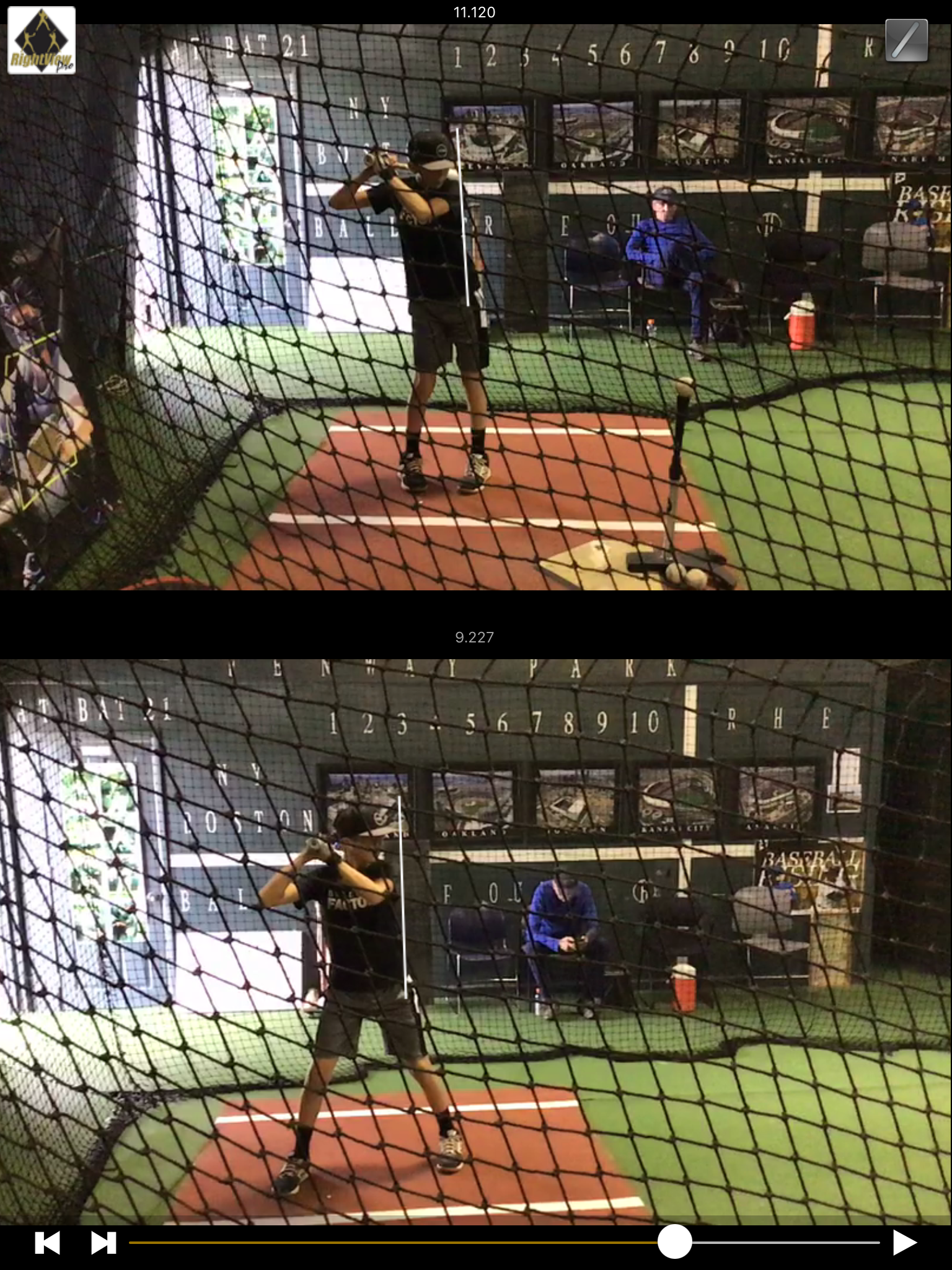 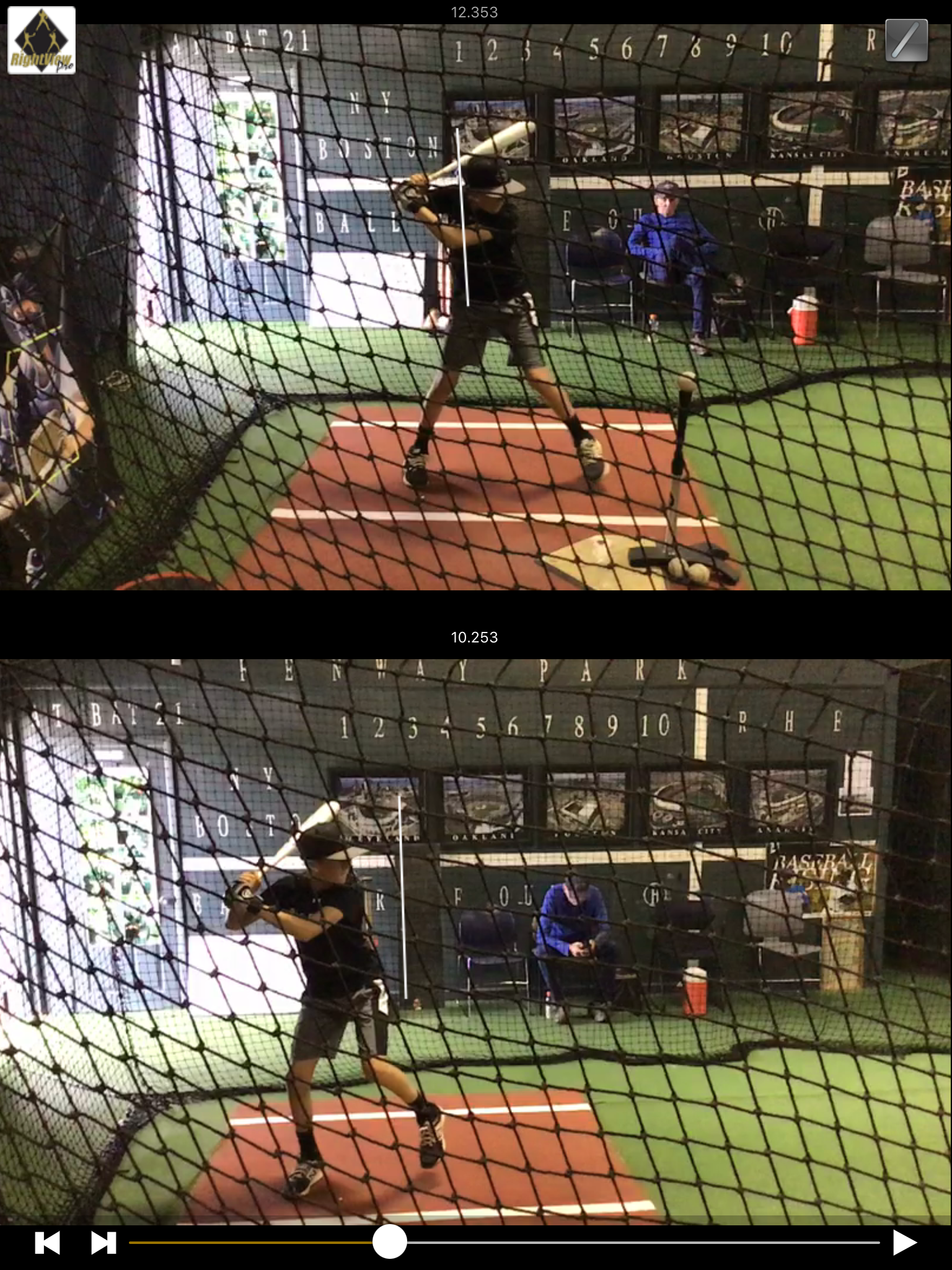 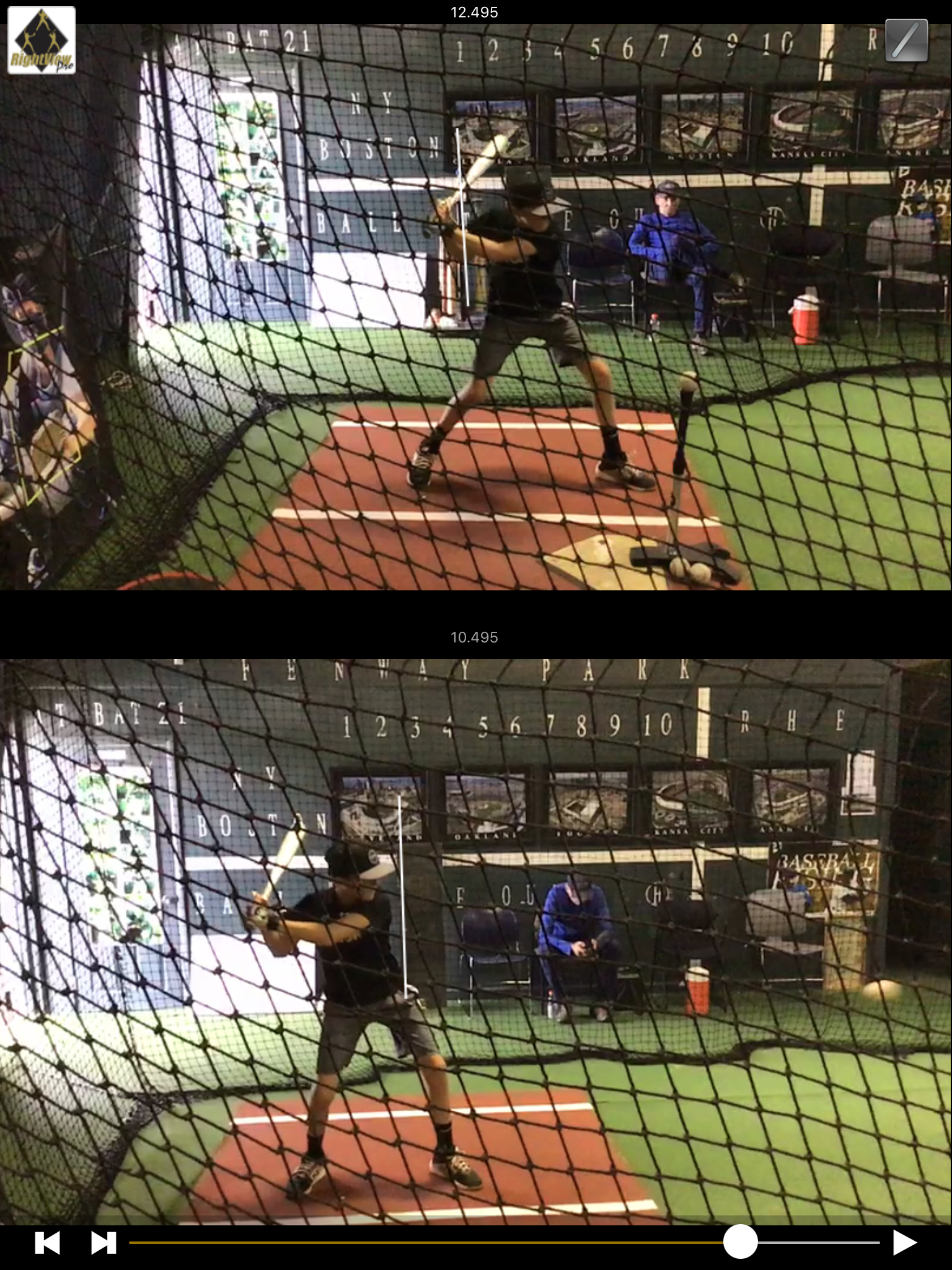 Another one of our athletes Nathan has utilized the Belly drill to simplify his move to the ball. A lot of the balls Nathan mishit were pull side ground balls. In the before/after videos, you’ll notice Nathan has simplified his leg kick (we still encouraged him to use a leg kick if he felt comfortable with it) and takes a much quicker route to the ball. This has helped him utilize the middle of the field more and prevents him from spinning off on balls the way he used to. 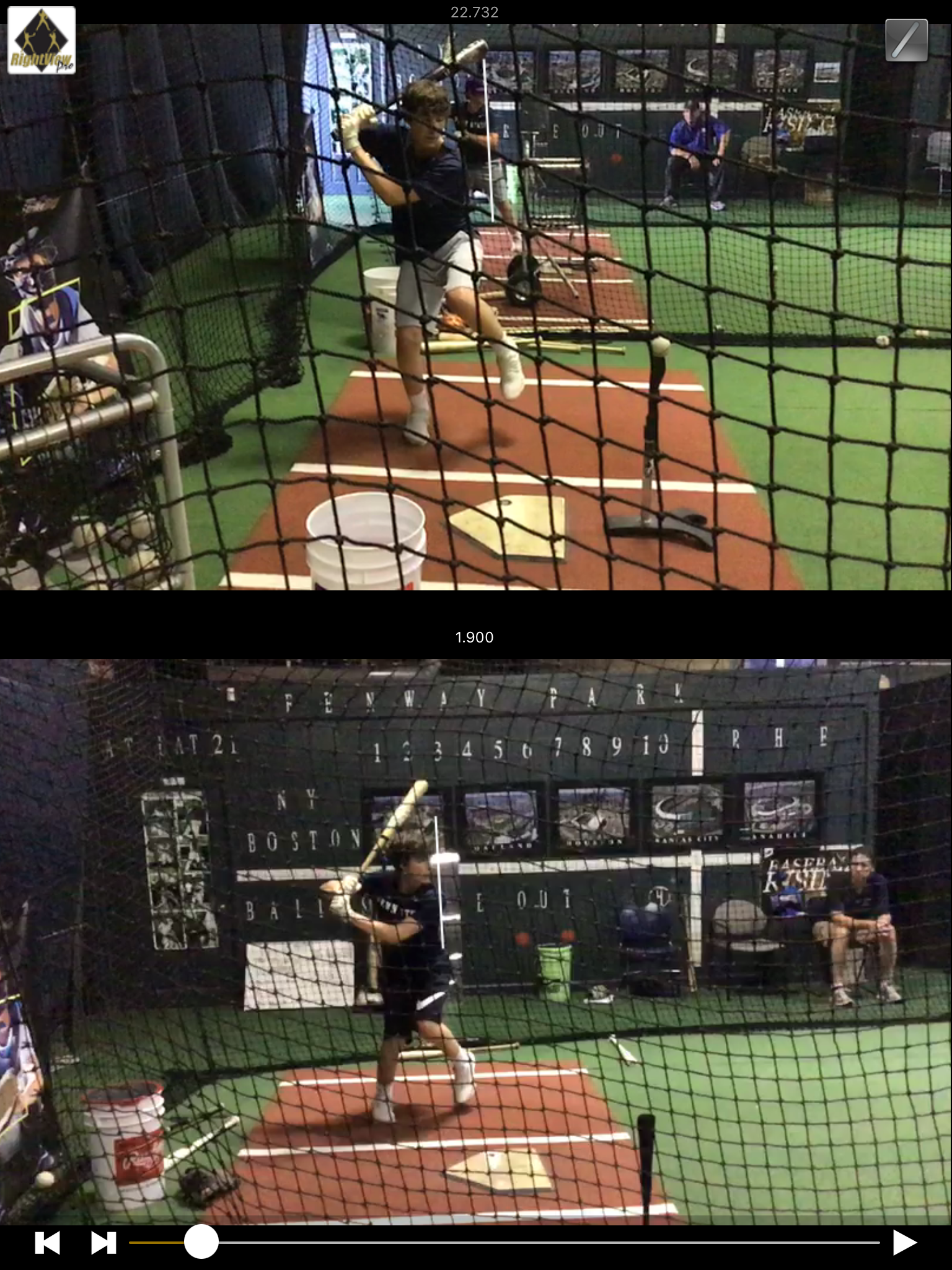 A different example of teaching this move is what we did with Sid. Sid showed a big negative move in which he lost his rear shoulder prematurely and inhibited his ability to work into the ground. This move also caused him to feel unbalanced. As a result, we tried to get him to think about keeping his front shoulder down while staying balanced. This helped create a more direct move to the ball in which he felt much more balanced (not balance in the traditional sense, but a dynamic balance in which the athlete feels under control while executing the movement). Keeping his front shoulder down helped Sid hold an attacking posture with his shoulders and ultimately helped him work into the ground better. 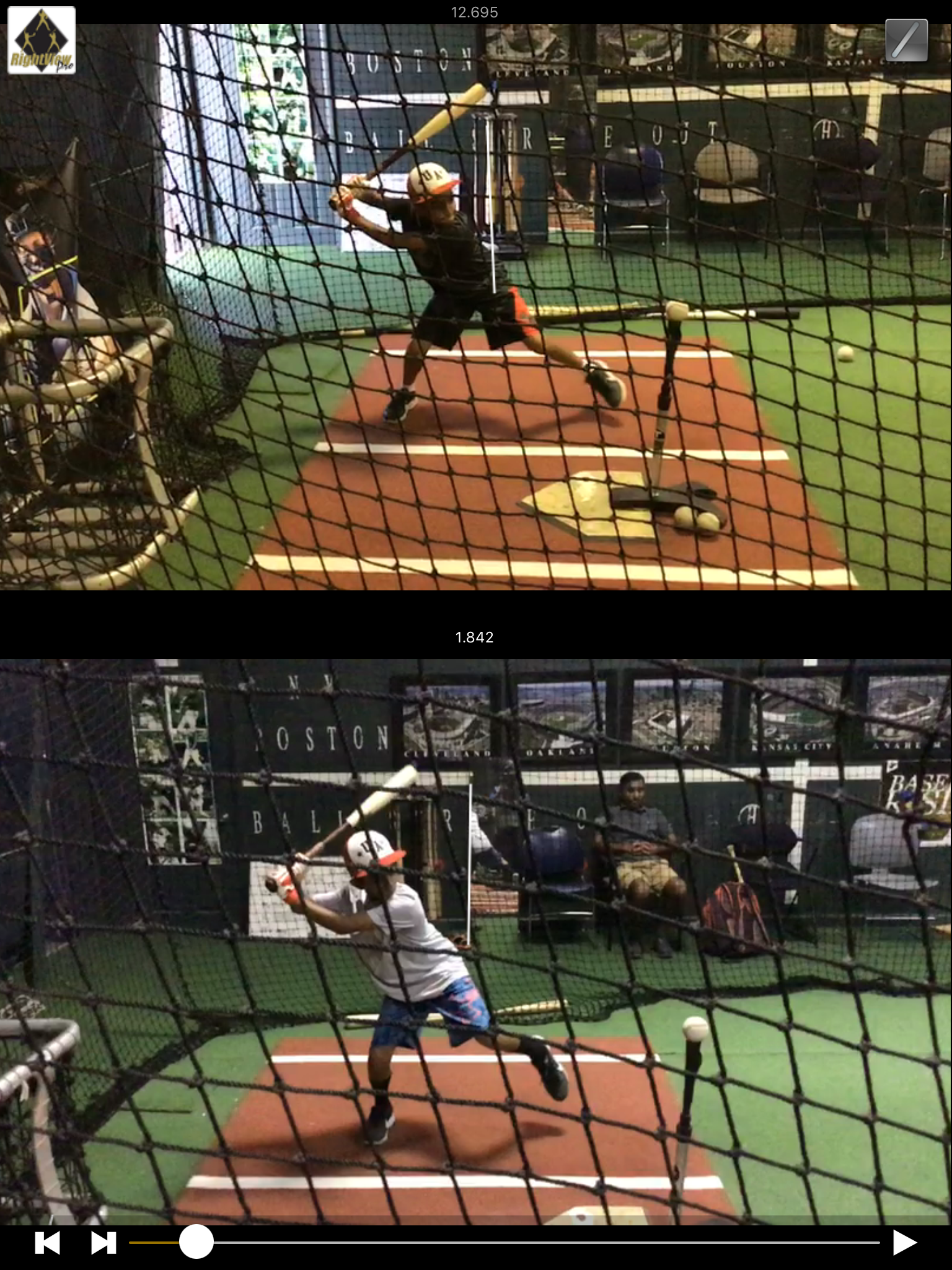 To see these changes at the MLB level, check out these swing transformations from Betts, George Springer, and Justin Turner.

It’s important to film and refilm when you’re making adjustments with athletes so they can connect a feel with what is real. Get film when the athlete feels really good and when the ball is popping off the bat. Use this feedback for when the athlete can start to go astray. Bad swing habits are just like bad habits in real life – they never go away. Because of this, it’s important to mix in refresher days so the new pattern can continue to stick.

Feel free to reach out with any thoughts, questions, or examples of your own. Keep learning and growing.

At 108 Performance, we have one specific kid in our program that stands out among the rest. This kid isn’t a big leaguer, college player, to even a starter on his high school varsity team. He’s only six years old. His name is Kellen.  Now Kellen doesn’t really stand out physically. He’s about what you … END_OF_DOCUMENT_TOKEN_TO_BE_REPLACED

Below is a sample scouting plan I put together for hitters to attack Dodgers ace Julio Urias this past postseason. Inside includes notable statistics, patterns, and actionable strategies I thought would be beneficial for opposing teams. All stats and video from Baseball Savant.   Notable Statistics Pitch Distribution 47.8% FB 34.2% CB 17.3% CH Started … END_OF_DOCUMENT_TOKEN_TO_BE_REPLACED

The other day I tried out a new skill. I went to the gun range.  As with any new skill, there was a learning curve to get up to speed. I received as crash course on the fundamentals of how to shoot. Top hand positioning, grip, how to wrap the left hand, footwork, how to … END_OF_DOCUMENT_TOKEN_TO_BE_REPLACED

As the ALCS and NLCS conclude and set the stage for the 2021 Fall Classic, below are some memorable moments from this postseason and what they can teach us about how to win games in October.      Two Strike Hitting In game three of the NLCS, Los Angeles trailed Atlanta 5-2 heading into the … END_OF_DOCUMENT_TOKEN_TO_BE_REPLACED

Before you call me crazy, try this trick out. Let’s create a situation where you’re working with a pitcher. On this day, they’re struggling to find their optimal arm slot. This is a pretty common issue we see when kids first come into the shop. There are a lot of different ways we could find … END_OF_DOCUMENT_TOKEN_TO_BE_REPLACED

On July 2, 1994 a lightning strike sparked a fire near the base of Storm King Mountain, about seven miles west of Glenwood Springs, CO. After 48 hours, the fire had only spread a mere three acres. While it didn’t start as an immediate threat to people, the persistent blaze caused local community members to … END_OF_DOCUMENT_TOKEN_TO_BE_REPLACED

In 1994, the New York Police Department (NYPD) implemented a data collection system called “StatCom.” The software was designed to increase and improve data collection on crime throughout the city so resources could be better allocated to areas of need. Objectives were built out, designed, and communicated in order to measure effectiveness. It started out with … END_OF_DOCUMENT_TOKEN_TO_BE_REPLACED

In episode ten of season five of The Office, Oscar Hernandez walks into his boss Michael Scott’s office. In his hands are a series of papers stapled together. The papers break down final costs over the past year for the Scranton branch. As Michael goes through the papers, Oscar explains how the branch did very … END_OF_DOCUMENT_TOKEN_TO_BE_REPLACED