Something we did every single day with our campers – both young and older – was catch ground balls. Being able to defend your position is a crucial skill as a player. Because of this, we place a heavy emphasis on the defensive portion of the game throughout our summer camps. If you can field your position at a high level, you will find yourself a spot on the field. Don’t believe me? Check out this excerpt from the 2017 World Series between the Dodgers and Red Sox.

The bottom line is this: Great teams play great defense. They catch ground balls, make throws, and eliminate free bees. Only 15 people in the world are being paid to just hit for a living. Odds are, it probably won’t be you. If you want to put yourself in the best possible position going forward as a player, we’d highly recommend you work relentlessly at your defense.

Catching ground balls is great for all positions – outfielders, pitchers, and catchers included. It promotes the athletic position, active footwork, good catch positions, requires athletes to hinge and flex into their hips, trains instincts (reading balls off the bat, making different routes), and promotes overall athleticism through various types of plays. If you want kids to learn and improve their defense, catching ground balls creates a huge bang for your buck.

For you to really take advantage of this period, it is crucial you take athletes far to their left and right. Typical practices feature kids fielding balls hit right at them with two hands and lethargic footwork. As a result, you have to get kids uncomfortable and really force them to make plays that require greater demands of athleticism. Through this, kids will gain more confidence and learn how to improve their range, take more efficient angles, and get better reads off the bat. Very few ground balls are going to be hit right at kids in games. If you want kids to be able to make various types of plays in games, you must create them in practice.

When making plays that force the athlete to move several steps to their left and right, it is very important they learn how to use one hand. We understand there is a time and place for two hands. However, using one hand helps give kids a better feel for good catch positions and gives them more freedom/range. Don’t believe me? Pre-set your glove on the ground with one hand as if you were going to catch a ground ball. Then take your throwing hand and move it towards your glove as if you were going to catch the ground ball with two hands. You’ll notice your glove starts to come off the ground as you start to take your throwing hand towards it. By using two hands, you’ve limited your range. If kids are moving multiple steps to their left and right, we need as much range as possible. As a result, it is imperative that kids learn how to make these plays using one hand.

Another point to emphasize would be the “ready position” before catching a ground ball. Just like hitting, a poor set up position is going to lead to poor positions down the road. Start by getting kids into the athletic position where their feet are slightly wider than shoulder width, their nose is over their center of mass, their knees are slightly bent, and hands are open and outside their hips. This position is the same position you’d see if you were to guard someone in football or basketball. It gives athletes the ability to work into the ground, create efficient angles off the bat, and set up for good catch positions. Kids should get into this position before every single ground ball is hit.

Many will get lazy with it and assume a more vertical starting posture. These kids are going to tend to be the ones that usually just miss balls underneath their glove. Others will keep their hands inside of their hips and start with them closer to the ground. If we sprint with our arms outside of our hips, it seems to make the most sense to start them there. There’s no need to start with our glove on the ground before the ground ball has even been hit. See the picture below for a better visual of what you want from your infielders. 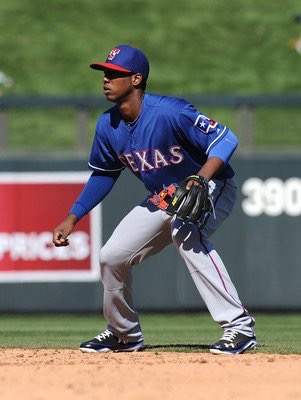 Once you create this athletic position, emphasize kids to “step into the circle” just before you hit the ball. In a game environment, fielders want to time this move when the ball meets the hitting zone (around the grass/dirt cut out). By having our feet moving when the ball comes off the bat, we’re able to get better reads off the bat and a quicker, more explosive first step. We like to compare this idea to a tennis player on the receiving end of a serve. You’ll see receivers get into an athletic position and then utilize a hop as the ball comes off the racket. We highly recommend this move with all of our infielders (see Bregman, Torres), but some sort of movement as the pitch is entering the circle will suffice. Just like catch play – stagnant feet lead to poor catch positions. All seven fielders must move in unison (see the Astros from the 2019 All-Star Game) with each pitch. If it’s not done, correct it until it is.

Whether you’re making throws or not, footwork after catching is just as important as the footwork prior to catching. Getting kids to play through the ball and replace feet is an important skill that will help accuracy and strength of throws. When we didn’t make throws, we had kids practice taking a shuffle and getting their front shoulder on first base after catching. Kids shuffle by clicking heels and creating direction towards their target – not by coming off the ground an excessive height or crossing their feet. If kids are making plays on the run, have them keep their feet moving through the catch and throw off of their post leg (right leg for right handers). While you don’t always have to make throws, it is important to practice patterns after you catch on every single ground ball you take (see Bregman).

One of the toughest things you’ll have to wrestle with kids is learning how to use the backhand. Most coaches deter kids from using the backhand and preach getting in front of everything. This mindset will get kids handcuffed in games when balls take them far to their arm side. As a general rule of thumb: If the ball crosses your belly button to the right, use your backhand. If it’s hit at you/to the left of your belly button, use your forehand. In situations where kids aren’t used to catching to their backhand, start slow and speed it up as they progress. Emphasize good early glove presentation (try to pre-set glove 1-2 steps before they catch) and praise effort/glove touches. Get kids working underneath the ball and get them to learn how to play through it. It’ll look ugly at first, but it will improve with time. Their forehand might get the job done most of the time, but their backhand will hold them back unless they learn how to practice with it.

Just like catch play, catching ground balls can get monotonous in nature. Spice it up using competitions and challenges that create game anxiety. Take careful note if the patterns you’re trying to create break down during these competitions. You want to keep ground ball work fun and engaging, but you don’t want movements to go to hell because kids are scared they’re going to drop the ball (ex: the kid who gets handcuffed because he’s afraid to use his backhand). The more you work at it, the more these patterns will start to become second nature. When they become more instinctive, you’ll start to see them surface when a little bit of pressure is put on the line.

At 108 Performance, we have one specific kid in our program that stands out among the rest. This kid isn’t a big leaguer, college player, to even a starter on his high school varsity team. He’s only six years old. His name is Kellen.  Now Kellen doesn’t really stand out physically. He’s about what you … END_OF_DOCUMENT_TOKEN_TO_BE_REPLACED

Below is a sample scouting plan I put together for hitters to attack Dodgers ace Julio Urias this past postseason. Inside includes notable statistics, patterns, and actionable strategies I thought would be beneficial for opposing teams. All stats and video from Baseball Savant.   Notable Statistics Pitch Distribution 47.8% FB 34.2% CB 17.3% CH Started … END_OF_DOCUMENT_TOKEN_TO_BE_REPLACED

The other day I tried out a new skill. I went to the gun range.  As with any new skill, there was a learning curve to get up to speed. I received as crash course on the fundamentals of how to shoot. Top hand positioning, grip, how to wrap the left hand, footwork, how to … END_OF_DOCUMENT_TOKEN_TO_BE_REPLACED

As the ALCS and NLCS conclude and set the stage for the 2021 Fall Classic, below are some memorable moments from this postseason and what they can teach us about how to win games in October.      Two Strike Hitting In game three of the NLCS, Los Angeles trailed Atlanta 5-2 heading into the … END_OF_DOCUMENT_TOKEN_TO_BE_REPLACED

Before you call me crazy, try this trick out. Let’s create a situation where you’re working with a pitcher. On this day, they’re struggling to find their optimal arm slot. This is a pretty common issue we see when kids first come into the shop. There are a lot of different ways we could find … END_OF_DOCUMENT_TOKEN_TO_BE_REPLACED

On July 2, 1994 a lightning strike sparked a fire near the base of Storm King Mountain, about seven miles west of Glenwood Springs, CO. After 48 hours, the fire had only spread a mere three acres. While it didn’t start as an immediate threat to people, the persistent blaze caused local community members to … END_OF_DOCUMENT_TOKEN_TO_BE_REPLACED

In 1994, the New York Police Department (NYPD) implemented a data collection system called “StatCom.” The software was designed to increase and improve data collection on crime throughout the city so resources could be better allocated to areas of need. Objectives were built out, designed, and communicated in order to measure effectiveness. It started out with … END_OF_DOCUMENT_TOKEN_TO_BE_REPLACED

In episode ten of season five of The Office, Oscar Hernandez walks into his boss Michael Scott’s office. In his hands are a series of papers stapled together. The papers break down final costs over the past year for the Scranton branch. As Michael goes through the papers, Oscar explains how the branch did very … END_OF_DOCUMENT_TOKEN_TO_BE_REPLACED